The first-ever, Stone County Economic Development Summit was held June 13th.  During the summit, presentations provided a snapshot of where Stone County economic data falls and how that measures up across Missouri.  Information was also provided on the state of Missouri's economic development efforts. 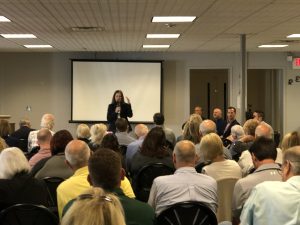 Rep. Hudson represents Stone, Christian and Taney Counties (District 138) in the Missouri House of Representatives. He was elected to his first two-year term in November 2018.

Mr. O’Brian has led Chambers of Commerce in economic development for more than thirty years.  As President of the Joplin (MO) Area Chamber of Commerce, Mr. O’Brian’s team developed a small business incubator; created a workforce training center in partnership with the local community college and developed and marketed one of the premier business parks in southwest Missouri.

Mr. Thieman has been in education for 29 years as a teacher, principal and now Director at Gibson Tech for the past eight years.  Gibson Technical Center, in Reeds Springs, serves ten area high schools in Stone and Taney counties and graduates approximately 150 seniors a year from its programs.  Mr. Thieman is an advocate for creating a strong, skilled workforce in the region.

Luke began his journey in economic development at the Department in 2008. In February of 2018, Luke became the Director of Strategic Initiatives for the Missouri Department of Economic Development.  In this capacity, Luke focused on advancing the Department’s priority initiatives through strategic planning and performance management.  On August 2018, Luke was appointed Deputy Director to assist in carrying out the mission to make DED the Best in the Midwest!

Ms. Rajek joined DED early this year having spent her career in the private sector, most recently providing consultant services in community and economic development to Cities, Counties and regional organizations across the Midwest.

TRRP was formed in 2017 to address the needs and opportunities of new and existing business and advocate for a business-friendly environment throughout the county.  The partnership has become a member of the Springfield Regional Economic Partnership (SREP) to gain access to professional economic development resources.

Goals of the partnership include information from area businesses on challenges and opportunities, assisting businesses with issues through business support programs and developing a strategic plan for economic development efforts.

The Table Rock Regional Partnership’s Business Retention & Expansion Program helps local businesses like yours: those that employ our residents and strengthen Stone County’s economy. Our partnership consists of Table Rock Lake Chamber of Commerce, Stone County Commission, the City of Branson West, the City of Kimberling City and Table Rock Community Bank. We provide companies with a single point of entry to a variety of business assistance resources.

You'll meet with a representative from the Chamber's economic development team to identify the challenges and opportunities your business is facing. During this confidential meeting, we will ask you questions on a variety of topics including industry trends, workforce, legislative and government affairs, community services, and infrastructure, current operations, and future planning.

Based on that initial conversation, we will coordinate with the organizations and agencies that can help resolve your issues and open doors to programs such as:

For more information contact Sheila Thomas at 417-739-2564 or sthomas@visittablerocklake.com.

Median Household Income based on 2010

Although other taxes have proliferated in recent years, the property tax remains a mainstay of local government finance in Missouri. It provides a major source of revenue for most local governments and will continue to be important to them.

The property tax gives local taxpayers a measure of control over their local governments. Local governments retain a greater measure of their autonomy when they can rely on property taxes. This tax provides a relationship to services received, such as police and fire protection and local streets, although it does so imperfectly.

Everyone pays this tax, either directly or indirectly, and its revenues would be very difficult to replace from other revenue sources.

More than 2,500 Missouri local governments rely on property taxes. They received more than $3.3 billion in property taxes in 1997. The taxes were levied on an assessed valuation of $54.4 billion, 25% of which was personal property and 75% was real estate. Because of new construction, and increased values, assessed valuations grew an average of 6% a year from 1985, when the first statewide reassessment was completed, to 1997. During that time, taxes levied grew by an average of 10% a year. The difference between those percentages is reflective of the tax rate increases adopted by local governments and their voters, and the creation of some new local governments.

How the Tax Is Determined.

The amount of property taxes imposed on any taxpayer is determined by two separate factors:

In setting values, the assessor is bound by laws and rules designed to assure that assessments are as 'uniform as possible. Once the assessor arrives at the total value of the taxpayer's taxable real and personal property, he/she calculates the portion that is assessed value by multiplying the total value by the percentages set in the law for each type of property.

Tax rates that have been set by the local governments taxing the property are multiplied by the assessed value and divided by 100. The result is the amount of tax levied against the property.

Property is assessed at differing percentages of value according to the type of property or its use. The statutes provide that all property improved by a structure which is used or intended to be used as a residence is to be classified as residential. The agricultural property must be devoted primarily to raising crops, livestock, dairying, etc.

Example: Homeowner's Tax Bill A home, owner with a $50,000 house and two cars worth a total of $15,000, living in an area where the tax rates levied by local governments (including the state 3-cent levy) total $5.70 per $100 assessed valuation, would have taxes calculated:

To view the complete document of 'The Property Tax In Missouri' click on the following link: www.stoneco-mo.us